So today we’ll see, how we can shorten the long git commands,
which can help programmers save time and a few keystrokes while working with git.

So lets work with git a bit. (Git a bit. Lol :p, a rhyming scheme. Does that help me qualify to be a poet, song writer?, umm… a rapper maybe? Maybe i should write a rap on this, yo mayne…! )

We’ll see 2 ways of adding aliases to our git commands.

How to add aliases to git commands:

Use the git config command to do the same.

Lets add another for add

Now, we can just fire the short commands instead of the long ones and see the result of the command
for eg. git status, we can write,

Lets break down the above command & take a look at the options we passed:

config: This option tells git, that everything following should be treated as the configuration for git, and can be added in the .gitconfig (or .git/config file depending on other options) file.

–global: The `–global` option tells git to add the alias in your ‘.gitconfig’ which is in your home folder,
which will be treated as your global settings for all git repos on your system,
unless you have another .git/config file inside a particular repo, overriding the global .gitconfig.
Try using the `–global` option since it will help you keep the same aliases across all repositories on your system, if you have a number of them.
Without the `–global` option git will consider the local repository by default.
Caveat: If you already have the <short_name> as an alias to some other previsouly added command in the config, the –global option will replace that previous one.

If you see in the ~/.gitconfig (~ = your_home_folder which is, /home/<your_login_name>/.gitconfig ) file,
you will notice that the shortened commands have gotten added under the [alias] section
Like this: 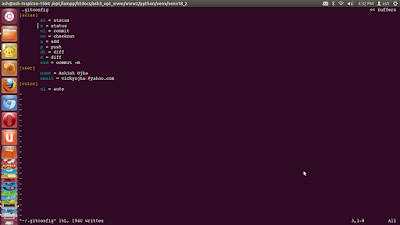 So instead of firing a `git config` command, lets try adding, the aliases directly into this file.

go under the [alias] section & type 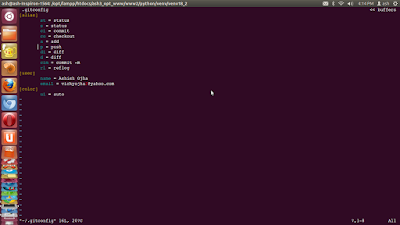 And now we can check the `reflog` command too, by typing

So, there we have it.
Let us know, if the above post was of any help to you.
Until later.

Oh ya! The complimentary rap i mentioned.

Hello Friends, welcome to Hackerdays.com. I am the Admin of the site. I have worked as a software programmer for 7 years. I have started this site to learn as well as share whatever little knowledge i have gained over the period of time. If you wish to contact me, you can drop in an email to: admin[AT]hackerdays[DOT]com or you can also use the contact page. Thank you and I'll see you around. View all posts by Admin

Find out more or adjust your settings.

This website uses cookies so that we can provide you with the best user experience possible. Cookie information is stored in your browser and performs functions such as recognising you when you return to our website and helping our team to understand which sections of the website you find most interesting and useful.

Strictly Necessary Cookie should be enabled at all times so that we can save your preferences for cookie settings.

If you disable this cookie, we will not be able to save your preferences. This means that every time you visit this website you will need to enable or disable cookies again.